Hello SWFTT tennis nuts! We’re back and “it’s great being us”!

What a day for playing tennis. The weather was perfect, the courts we’re groomed (how did we get Lighthouse Captain Mishko to do our work?), and no one was hurt (with some ego exceptions).

The Landings hosted the great guys from Lighthouse Bay. Even though Lighthouse took the win 3-1, we all enjoyed our day in the sun.

Beachview hosted CCRC to a day on the island of Sanibel. Beachview won all 4 courts but 3 were pretty close matches, with one going to a third set tie break.

Pelican Landing hosted Plantation to a day at the club in Bonita. Plantation won all 4 courts and Captain Engelhard will be glad when the tournaments are over and he has his full roster back in play.

Today’s match was match number 9 out of 21 for the year. We’re closing in on half of the season even though it seems like we just started. I know I share the same thoughts of not looking forward to the end of the season. Thanks to all for the great effort and kindness of making SWFTT a success.

Have fun, play tennis and remember, “It’s great being us”!

Last week was a great week for SWFTT. First we had 48 League members playing great tennis. We had numerous fans watching this great tennis. We supported the economy by wearing out Penn and Wilson tennis balls and we consumed a great number of the drink of choice of men (brewsky’s).

Something a lot of you may not have noticed SWFTT was represented very well by 6 very good members at the Longboat Key Senior Clay Tournament.

The tournament started on Thursday, November 27 and finished on Sunday, December 2nd. The play included Men’s and Women’s singles and doubles starting with age bracket of 55 going up to 80. On the men’s side, there were 12 different events. SWFTT members won 3 of the 12 events and had 2 members reach the quarters of another event and 1 member make it to the Semi’s of the same division. I think it’s pretty cool that our guys brought home 25% of the 1st place winnings without having players playing in 4 of the age brackets. GREAT JOB GUYS!

To start with, SWFTT player Paul Veltman with partner Chuck Kinyon made it to the Quarter finals of the Men’s 65 doubles and lost to the number 1 seed.

SWFTT player Larry Albritton with partner Robert Dixon also made it to the Quarters in the same division only to lose in a three set thriller to another SWFTT member Mike Melnik and his partner Thomas La Penna. Unfortunately Mike and Thomas lost in the Semi’s.

SWFTT Team of Steve Shreiner and Howie Ames playing in the Men’s 60 Doubles Division played like superstars bringing home the 1st place title in that division. All matches were finished in two sets and Steve and Howie only gave up 16 games.

SWFTT member, Fred Drilling got the most “bling”. Taking 1st place honors in the Men’s 70 Singles and Men’s 70’s Doubles. Fred’s impressive play gave up only 23 games in total of both divisions for the tournament.

Guys, we’re proud of each of you. We’re glad we get to challenge you, learn from you, and be your friends. GREAT JOB! 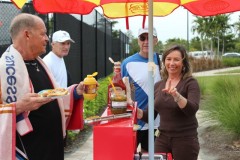 Our first match is behind us and I’ve haven’t heard of any broken bones. I did see some great tennis though!

After all the dust settled, we had two of the three matches split with 2-2 scores. It seems so far we have some very good parity on many of the teams.

The Landings hosted the Plantation team. Traveling all the way from the other side of I-75, they came prepared to battle. Plantation Captain’s Ransom and Natale first said they “just didn’t want to be embarrassed”. I think they were trying to set us up since they brought a group of great guys and great tennis players. For the most part, no hard feelings or bad calls we openly visible (only because I didn’t play). At the end of the day the match was a tie of 2 for the Landings and 2 for Plantation. Great job guys!

The Vines hosted Cape Coral Racquet Club. Captain Dueease of the Vines and Stern of CCRC tried negotiating themselves to an advantage but the courts decided a tie of 2-2. Afterwards Captain Dueease was rumored to have run off with his sister or maybe it was Captain Mike’s sister. Who knows? Who cares?

I would like to thank everyone for the efforts in making this League possible and the level of great tennis that it is. I any of you know of anyone else that would like to play, have them contact me through the web site contact tab.

“Move forward, eyes on ball, contact point out in front and smile on your face”!